It looks like things really may be over between Gisele Bundchen and Tom Brady. The Brazilian model, 42, was noticeably without her wedding ring while taking their two kids Benjamin, 12, and nine-year-old Vivian to their Miami gym on Oct. 5, 2022. The sighting made rumors the duo was headed for divorce all the more real.

Though Gisele’s personal life may be less-than-perfect, she looked like she was coping just fine. She didn’t seem downcast, even cracking a small smile as she looked down at her phone. Her hands were full, however, as she carried an armful of the kids’ athletic gear.

The catwalk queen was still glowing, showing off dewy, golden skin with her caramel blonde tresses down, shiny and smooth. She went with a basic look, rocking a white tank top and grey sweats for the gym trip. 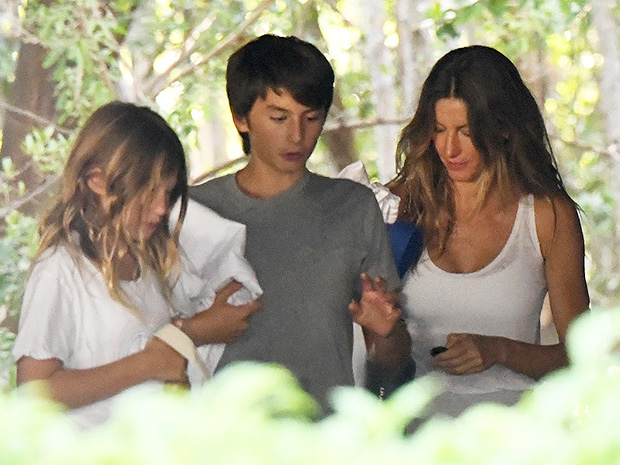 The family outing comes after reports that both of the A-listers had secured divorce attorneys. The couple is currently “looking at what a split will entail, who gets what and what the finances will be,” according to sources who spoke to Page Six.

It’s been a tense few weeks between the retired Victoria’s Secret Angel and her quarterback husband, according to insiders. Since the NFL season kicked off in early Sep., the pair have been courting breakup rumors.

The couple is reportedly at odds over his decision to return to football after he already announced he would retire after the 2021 season. Insiders revealed that they had been “living separately” after he took a brief leave of absence to deal with “personal issues” during this year’s summer training camp.

So far, Gisele has yet to appear at one of Tom’s football games this season. When Hurricane Ian swept through Florida, the couple were said to be hunkering down separately, but not far from one another.