(I Want to Thank You)

Here are the stories of a disabled woman, her father and her caretakers; a lawyer and her late mother’s physician; a woman with paraplegia and her home health aide; and a contact tracer.

Thank You for Caring for My ‘Profoundly Disabled’ Daughter

In 2001, Doug Jacoby was reading to his 5-year-old daughter, Devon, in their Easton, Connecticut, home when the book fell on the floor. She climbed off his lap and scooped it up — an innocuous moment for most families, but for the Jacobys, it was groundbreaking.

With that simple action, Devon, who has brain damage and is nonverbal, defied the doctors who had told her parents she would always be slow to respond to stimuli. (She does not have an official diagnosis but is “profoundly disabled,” her father said.)

In 2020, Devon Jacoby was receiving assistance at the Saint Catherine Center for Special Needs in Fairfield, Connecticut, and had been since she turned 21. But when the pandemic shut down the center, her progress was threatened: Constant engagement is crucial to her development, said Doug Jacoby, 72.

Then, in April 2020, the center began to offer virtual programming over Zoom, and for two to three hours a day, Devon Jacoby was engaged and happy. (Her parents are divorced, and she splits time living with each of them.) During music therapy sessions, she would bop her head to the beat. When the center reopened in July 2020, her father knew he was sending her, now 26, back to people who genuinely cared for her.

“You don’t work with people like my daughter and do it well because it’s a job. You do it because it’s a calling,” he said. “I have too much gratitude to have the ability to express it.”

The center’s virtual sessions also included weather updates and story time. During music therapy, Doug Jacoby, who works from home as a freelance writer, would hold a wooden spoon in his daughter’s hand and help her bang it against a pot.

“It takes time to really get to know her, but when you do, you can sense when she’s happy,” he said. “Most of the time with the music, most of the time during story time, you can tell that she was engaged.”

Most of the calls Jackie Marzan made to her mother’s doctors to inform them of her death from COVID-19 in November 2020 followed a familiar script: The doctors expressed shock, offered their condolences and said goodbye. And then Marzan, sitting in her mother’s apartment in the New York City borough of Queens, called Dr. Vanessa Tiongson, her mother’s neurologist at Mount Sinai Hospital. They spoke for more than two hours.

Marzan’s mother, Aura Shirley Sarmiento, typically preferred that her doctors spoke Spanish; Tiongson did not, but she earned Sarmiento’s trust nonetheless. Not long before her death, Sarmiento called Marzan crying tears of joy: Tiongson’s positive attitude had given her hope.

Tiongson’s empathy stuck with Marzan as the pandemic decimated her family: Over the next year, Marzan would lose her grandmother and two aunts to COVID-19. In April, her father-in-law also died from the virus.

As the months wore on, she found fewer conversation partners willing to discuss COVID-19 and her family.

“People don’t want to hear about COVID,” she said. “They say, ‘Oh, it’s not that bad anymore.’ It’s like, yeah, but COVID, it permeated our lives.”

Tiongson didn’t forget. In January, Marzan received a holiday card from Tiongson, with a photo of the doctor’s children and a note expressing her love for Sarmiento. “I thought, ‘Who does this?’ ” Marzan said.

Although she considers herself a minimalist, she said, she’ll always have room in her home for that card.

Thank You for Being My Home Aide and Having Compassion

Annie Verchick, a woman with paraplegia and a traumatic brain injury living in rural Laporte, Colorado, has worked with a revolving door of home aides. But over the past couple of years, as the pandemic compounded Verchick’s isolation, her relationship with Karen Coty, a home aide, blossomed into friendship.

In the spring of 2021, when Verchick was diagnosed with endometrial cancer, Coty accompanied Verchick to her appointments and brought her ginger ale and ice packs.

Coty first started working with Verchick in 2016, and soon they were playfully arguing about werewolf romance novels and dissecting “M.-A.-S.-H.,” a hit TV show that ran from 1972-83. 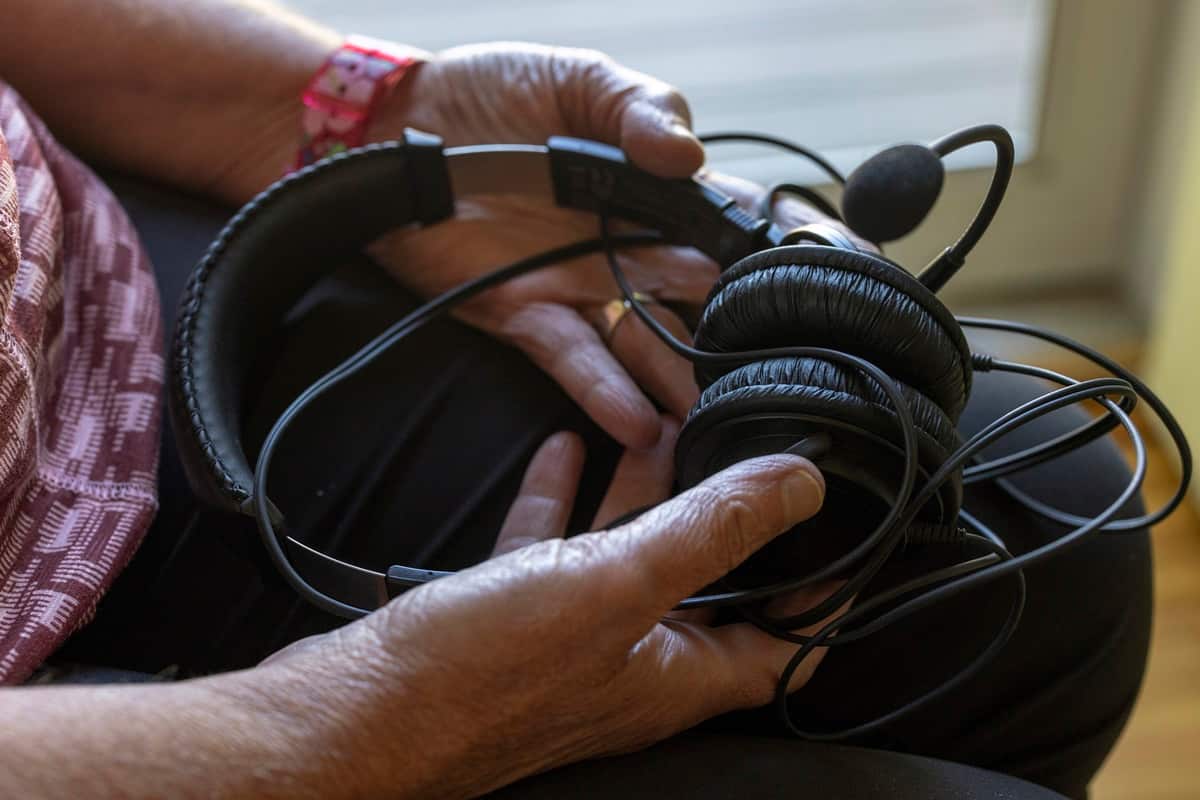 Jennifer Guy Cook holds the headset she used as a contact tracer, at her home in Brighton (Lauren Petracca/The New York Times)

“It was OK to have things be silly and not be tragic all the time,” Verchick said. “Karen is really disinterested in treating people as though they’re special and precious, which makes her a big win for me. You don’t get to be special. You’re a whole human being — who’s in a chair. That’s a really rare attitude.”

Coty stopped working with Verchick in November 2018 so she could attend school, before returning in the summer of 2019. When Verchick, who has neurogenic bowel dysfunction, had what she called an “incontinent disaster” and the aides scheduled to work that day couldn’t show up, she called Coty, who was there 10 minutes later. Coty cleaned everything up and slept over the next two nights.

Coty resumed her post with Verchick and stayed through the pandemic. She left this past July to pursue other opportunities — but not before training Verchick’s new aides.

“I don’t know that she realizes on any level how meaningful it is,” Verchick said of Coty’s friendship.

Thank You for Letting Me Help You as a Contact Tracer

Jennifer Guy Cook’s home was eerily quiet. So, she filled it with the voices of strangers.

Cook, 68, had spent the past three-plus decades running a day care out of her home in Brighton, New York. When she shut down the business because of the pandemic, she landed a position with New York state’s COVID-19 contact-tracing initiative. She had found a purpose: helping people through a tough time in their lives.

For 20 hours a week, Cook would call people who had been in close contact with someone who had tested positive for COVID-19. Cook held the job only from December 2020 to June 2021, but she’s grateful for the connections she made.

“I wanted to be a part of helping,” Cook said. “I could certainly make phone calls.”

Amid the gray Brighton winter, Cook relished the human connection. (She would tease fathers who had forgotten their children’s birthdays, joking that mothers normally had a less difficult time remembering them.) Her job was, on the surface, informational: She was to provide facts about the virus and potential warning signs. But it turned into much more.

That’s where Cook would interject with a light joke or words of encouragement. “It’s injecting your own humanity in the conversation,” she said. “And just by doing that, it changes everything.”

This article originally appeared in The New York Times.