Skip to content
HomeWorldRoger Federer and Rafael Nadal Were the Best of Rivals. In the End, They’ll Be Partners.

The rivalry between Roger Federer and Rafael Nadal has been a 21st-century staple.

Righty versus lefty. Panache versus perspiration. Zen vs. Vamos.

Back in the day, it was the establishment versus the avant-garde, as well, but that distinction has blurred through the decades, just as the edge has softened. Many of the new-age fans whom Federer and Nadal attracted to the game might need reminding that Federer is nearly five years older than his defining rival from Mallorca.

That significant age gap helps explain why Federer will be the first of the golden-era gang to retire from professional tennis (even if Andy Murray came tearily close a few years back before soldiering on with an artificial hip joint). Federer turned 41 last month and will play what he insists is his final competitive match on Friday night in the Laver Cup team event in London.

“Sitting here, it feels good that I go first from the guys; it just feels right,” Federer said at a news conference Thursday, flanked by Murray, Nadal and Novak Djokovic, all his teammates for this special farewell weekend at the O2 Arena.

They were once the Big Four, with Murray serving as Ringo Starr, but they have long since become the Big Three. Federer, Nadal and Djokovic have racked up 20 or more Grand Slam singles titles and won multiple majors in their 30s, often at one another’s expense.

Their careers are all deeply, inextricably intertwined, and Nadal and Djokovic have actually played each other significantly more on tour than Nadal and Federer.

But Fedal was the original golden-age rivalry, and if “Fedal” still sounds a bit clunky, best to consider the alternatives. “Naderer”? No gracias.

Federer and Nadal first played singles in March 2004 in a night match in the third round of the Miami Open, with the 17-year-old Nadal ambushing the top-ranked Federer in little more than an hour. The final score was 6-3, 6-3.

But their first match was actually the week before, when Nadal and his Spanish compatriot Tommy Robredo defeated Federer and his Swiss compatriot Yves Allegro 5-7, 6-4, 6-3 in the round of 16 in Indian Wells, California.

For those like me who like their symmetry, it feels rather neat and tidy that Fedal will end back on the doubles court, as they partner each other, creaky knees willing, on Friday night for Team Europe against Frances Tiafoe and Jack Sock of Team World. “Different kind of pressure,” Nadal said of the occasion. “After all the amazing things that we shared together on and off the court, to be part of this historic moment is going to be something amazing, unforgettable for me. Super excited. I hope I can have a good chance to play at a decent level, and hopefully together we can create a good moment and maybe win a match. So, let’s see.”

Victory is hardly guaranteed. Sock, whose whipping forehand has even more topspin than Nadal’s or Federer’s, is one of the world’s best doubles players, and Tiafoe, his fellow American, is still on a high after making a breakthrough run to the semifinals of this month’s U.S. Open in singles.

“Obviously tomorrow night is going to be a beyond-iconic evening,” Sock said Thursday. “I’m just stoked to be a part of it with my guy Foe next to me. We will go out and enjoy the moment, but not going to hold anything back. Sorry, Roger. Don’t want to spoil the night.” 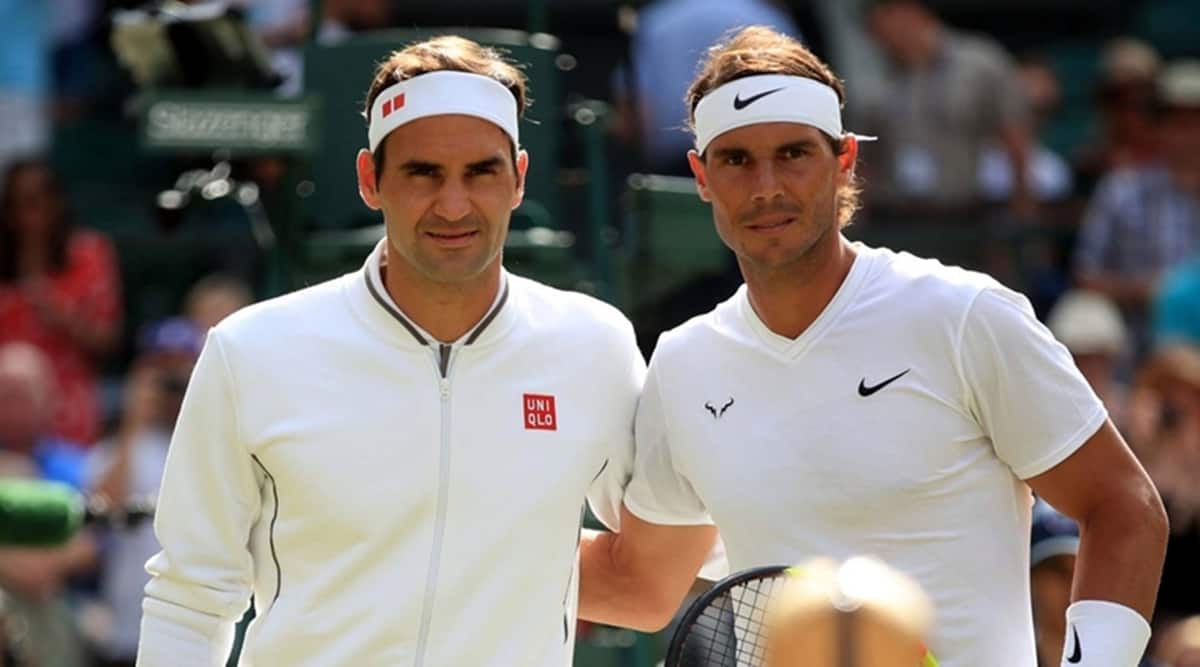 Roger Federer in a picture with Rafael Nadal before a Wimbledon final. (File)

Perhaps Sock needs to be reminded that Federer is a co-owner of this event, launched in 2017 to create a tennis version of golf’s Ryder Cup and establish a more solid bridge between the generations, with captains John McEnroe and Bjorn Borg on opposite benches and Rod Laver as the namesake.

But Federer, who wants the Laver Cup to be taken seriously even though it awards no ranking points, would surely have no quarrel with Sock and Tiafoe going full throttle. And it is honestly hard to imagine anything spoiling the night other than Federer limping around the O2, unable to cover his half of the court. None of the so-called Big Three of men’s tennis were in the No. 1 or No. 2 spots in the ATP rankings (File Photo)

Nobody is up for that, even if Federer is smartly trying to manage expectations.

When Borg, Team Europe’s silver-maned captain, was asked about his squad on Thursday, his answer was: “Everybody is healthy. They are ready to play.”

Not prepared to play one more singles match because of his postoperative knees, Federer chose doubles as the safer option, but this will still be his first competitive match in more than 14 months.

There will be rust, and then there will be the emotions, his and his public’s, and as the thousands of fans present for Thursday’s open practice session made clear, there will be noise. 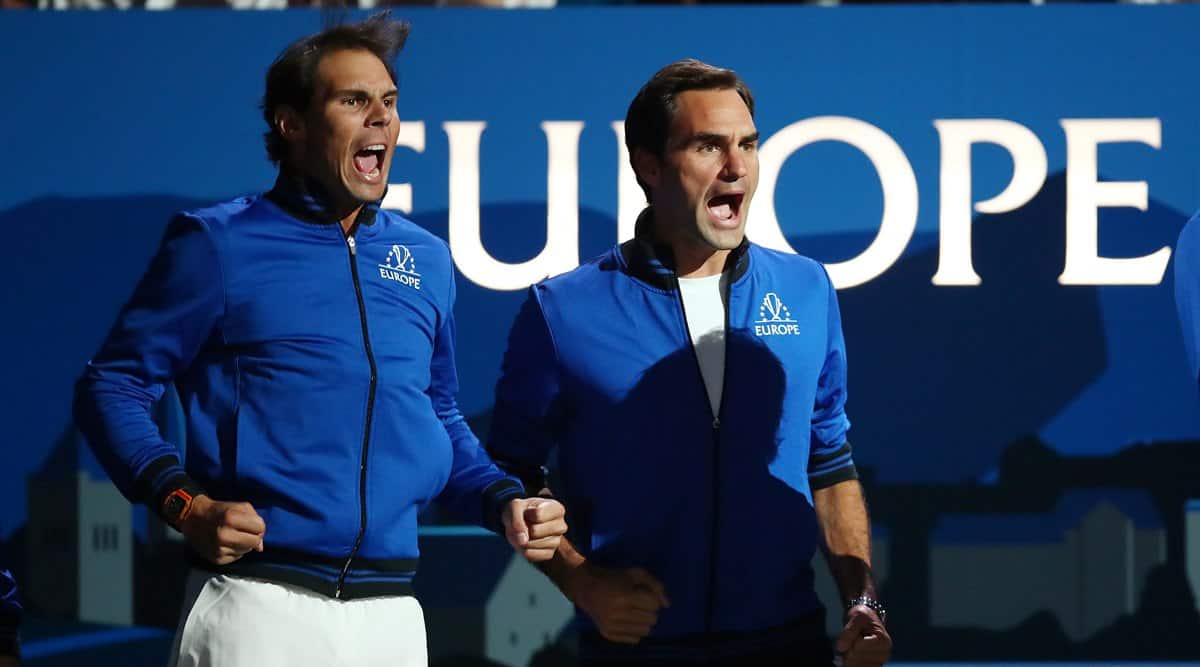 Ivan Ljubicic, one of Federer’s longtime coaches, took it all in courtside and started to tear up, and he is not even playing.

“I’m not sure if I can handle it all; I’ll try,” Federer said. “I have had some tougher moments as well in the past, you know, being horribly nervous all these years sometimes before matches. This one definitely feels a whole lot different.”

It’s different in part because his co-tormenters-in-chief, Nadal and Djokovic, are teammates this time.

“I am super excited to have them on our team and my team and not having to play against them on my last match,” Federer said. 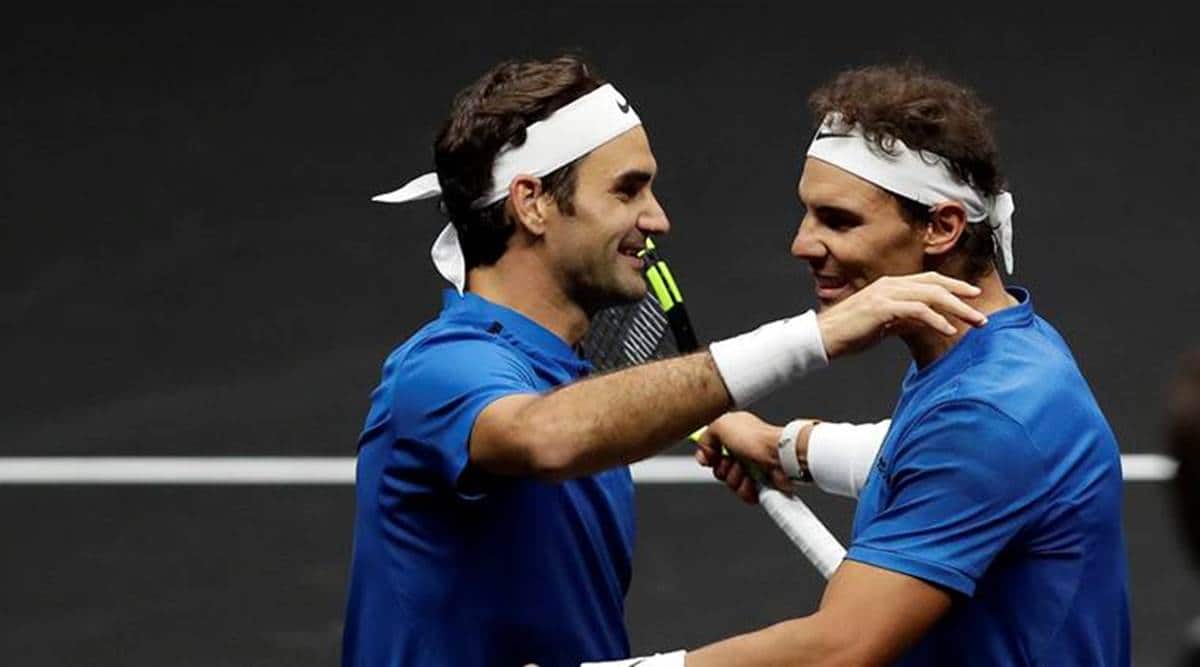 Federer and Nadal won all Grand Slams in 2017. (Source: Reuters)

It certainly has lightened the mood in the prelude.

On Thursday, Djokovic was asked which of his previous battles with Federer first came to mind.

Djokovic gallantly began with the 2007 U.S. Open final against Federer.

Djokovic: “I lost that match.”

There was laughter, and he soon got around to mentioning the 2019 Wimbledon final, in which Federer had two match points on his serve in the fifth set but was unable to close it out. (Djokovic gallantly did not go into these details either.)

“What happened?” Federer asked. “I’ve blocked it out.”

There was more laughter, which has certainly not been the rule among men’s tennis rivals over the past couple of decades. So many major titles have been at stake so often as they pushed each other on the match court and, in their quieter moments, on the practice court. 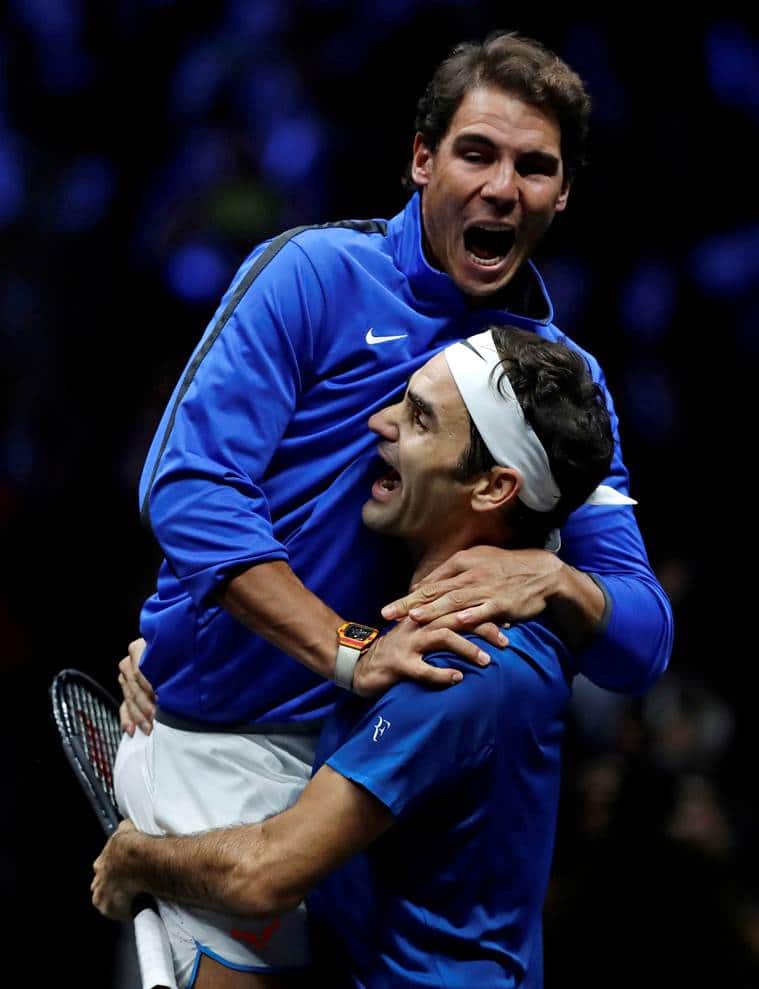 Roger Federer and Rafael Nadal of Team Europe celebrate after winning the match in the 2017 Laver Cup. (REUTERS)

They all became better because of that daily pressure, and Federer and Nadal concluded long ago that they had more reach as a pair than on their own.

The backlist is strong, too, even if they, frustratingly for us symmetrical sorts, never played at the U.S. Open. And though Nadal will forever lead the series 24-16, Federer can glide into the sunset (and toward their future exhibition matches) with his strong chin held high after winning six of their last seven encounters.

“Through time, we’ve left behind a bit of that hard-core rivalry on court for a rivalry that we both value and understand has been part of something special within the world of sport,” Nadal once told me. “And I think we also understand that both of us have benefited from it, and we have to take care of it.”

On Friday night, on the same side of the net at the end of an era, they can take care of each other.

This article originally appeared in The New York Times.